Married (2) Margaret Anwyl Evans. They had the following children:

Richard Hibbert rowed for Shrewsbury and St. John's College, Cambridge, where he was awarded a double first degree. He served in the Indian Civil Service (ICS), as deputy Commissioner in Dera Ghazi Khan (Punjab, Pakistan), then as Assistant Commissioner at Amritsar (Punjab, India), and then in Dharamsala (now in Himachal Pradesh, India). At Dharamsala his residence was the house now inhabited by the Dalai Lama in McLeod Ganj. After leaving the ICS in 1947, he undertook legal training, later winning the McCrell prize for Best Practising Solicitor. He lived in Fenstanton, Cambridge, and then in Hertfordshire, while working for London Solicitors. 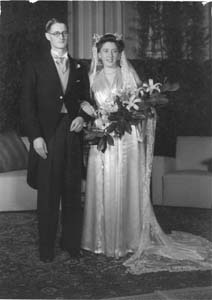 Richard and Elisabeth Hibbert on their wedding day