Son of David Geddes of the Hudson Bay Company and Margaret Cruikshank b.17?? d.1805 More information

George Geddes returned home to Stromness, Orkney almost a year after his father's death, having undertaken a study of his father's business, by spending time at shipbrokers in Liverpool, learning banking at Manchester and London, and then in Canada, familiarising himself with the activities of the Hudson Bay Company. With the ending of the war with France, the fortunes of the family business, which was somewhat extended through the shipping bubble of the war years, went into rapid decline. All George's brothers were now dead, and the burden fell on his shoulders alone. James Anderson, 1st of Rispond, father of George's wife, helped him by buying some shipping assets. George was eventually forced to declare bankrupcy and then in 1819 had to move to Liverpool with his family to escape the sometimes violent attacks on them by the Orcadians. He worked there as best he could repaying money as it became possible. His family lived in great hardship. He died with his wife of typhoid fever in Liverpool, leaving 4 daughters and 3 sons. The girls were looked after by Ann Anderson and General John Anderson, her brother, looked after the boys, first at Rispond and afterwards at Smoo House. 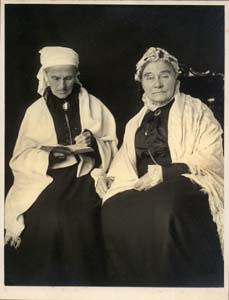 The four sisters of this family took over a girls' school at 16 Atholl Crescent, Edinburgh on the death of their aunt Ann Anderson (VII 14) in 1855.