John Tomlinson Hibbert attended Shrewsbury School then St. John's College, Cambridge, where he read Law. Having been admitted at St John's College Cambridge on 15th May 1843 he graduated BA as next above the 'wooden spoon' in the Mathematical Tripos'. He moved into politics, becoming Sir John Hibbert KCB. He served as P.S. to the Local Government Board, Under-Secretary to the Home Office, Financial Secretary in Gladstone's Cabinet (1884 to June 1885 and June 1892 to March 1894), and Secretary to the Admiralty (February to July 1885). He built (1880 - 2) a stately home called Hampsfield, situated between Lindale and Grange-over-Sands in the southern Lake District, in England.

Sir John is mentioned in The Life of the Rt. Hon. Sir Charles W. Dilke, Volume 2 by Gwynn, Stephen Lucius, 1864-1950 as follows:-
[In 1884] When the amendment [to allow women's suffrage] was reached, Dilke, with Fawcett and Courtney, abstained. This led to serious trouble. Sir Charles wrote on June 12th in his Diary: 'Hartington is very angry with me for not voting, and wants me turned out for it. He has to vote every day for things which he strongly disapproves, and this makes the position difficult. He says that my position was wholly different from that of Fawcett and Courtney, because I was a party to the decision of the Cabinet, and that custom binds the minority in the collective decision of Her Majesty's servants. This is undoubtedly the accepted theory. Poor Hibbert¹ was made to vote. I fear the Cabinet put the yoke, not of political necessity, but of their personal prejudice against woman suffrage, on the necks of their followers.'

¹Sir John Tomlinson Hibbert (d.1908), at this time Financial Secretary to the Treasury, was an able administrator, and held office in Mr. Gladstone's four administrations. He assisted materially in the passing of the Execution within Gaols Act [ending the spectacle of public hanging], Married Women's Property Act, and Clergy Disabilities Act, and was keenly interested in the reform of the Poor Law.

[Western Mail, Tuesday, May 21, 1889] JH was appointed to the Welsh Sunday Closing Commission.

This month marks the 150th anniversary of the passing of the 1867 Reform Act. Introduced by Benjamin Disraeli and Lord Derby’s Conservative government, it added around a million voters to the register, primarily in borough constituencies. This greatly exceeded the numbers who would have been enfranchised by the Liberal ministry’s 1866 reform bill, put forward by William Gladstone and Lord Russell. Disraeli’s willingness to accept Liberal backbench amendments to the Conservative bill in order to secure its passage – and to keep Gladstone on the back foot – meant that the measure which emerged from the debates in the Commons was rather different from that originally proposed, as many of the safeguards which Disraeli had included to limit the effects of household suffrage were removed.

Our MP of the Month, John Tomlinson Hibbert, was among those Liberal backbenchers who took a keen interest in the reform debates and played a prominent part in shaping the measure. Returned as MP for his native Oldham at a by-election in May 1862, he was re-elected in 1865 alongside his fellow Liberal, John Platt. As well as their shared political views, Hibbert was connected to the Platts through business: his father had founded Oldham’s largest engineering firm with Platt’s father in 1822, although by 1854 the Platts had bought out the Hibbert interest. Instead of following in his father’s footsteps, Hibbert qualified as a barrister. Although he did not practise as a lawyer, his legal training proved a valuable asset in his parliamentary career, and John Stuart Mill praised him as ‘rather clever as well as careful in framing amendments’ to legislation. He was also linked to the Platts by marriage: John’s younger brother James, another Liberal MP, who was killed in tragic circumstances in 1857, had married Hibbert’s sister-in-law.

Hibbert made his determination to be an effective constituency MP abundantly clear in his maiden speech, made the day after taking his seat. He highlighted the plight of Lancashire’s workers during the ‘cotton famine’ caused by the greatly reduced supply of raw cotton during the American Civil War. Hibbert also took a particular interest in law and order. He was deeply concerned about the ‘demoralising’ spectacle of public executions, to which spectators travelled on special excursion trains ‘to gratify their depraved appetite’. He made unsuccessful attempts in 1865 and 1866 to legislate for executions to take place privately within gaols. These efforts prompted the Conservative government to take up the question, passing the Capital Punishment within Prisons Act in 1868. Hibbert himself witnessed the first execution held under the Act.

He was also active in select committee work, serving on numerous inquiries. There was, however, much amusement among fellow MPs in June 1866 when Hibbert’s doctor was called to testify before the House that Hibbert would be unable to perform his duties as chairman of the committee on the Helston election petition, having been ‘taken exceedingly ill on his return from the Duke of Devonshire’s party’.

Hibbert played an important role in the debates on the 1867 Reform Act. Although Disraeli described him as ‘a man of extreme and advanced opinions’, he was among those Radicals whose support Disraeli was keen to cultivate in order to pass the bill. Notably, Disraeli tried to persuade the Cabinet to accept Hibbert’s amendment on the complex question of ‘compounding’. The Conservative ministry’s bill stated that those wishing to qualify as voters under the household franchise in boroughs must personally pay their rates, a proviso which would exclude those who ‘compounded’ their rates by paying them to their landlords as part of their rent, for which they received a discount. Hibbert’s amendment aimed to remove this financial disincentive for householders to opt out of compounding in order to be registered as voters by allowing them to continue to pay the reduced amount.

Having failed to convince fellow ministers to accept this amendment, Disraeli not only opposed it, but made the division on the ministry’s alternative proposal a confidence vote. Despite strong support from Gladstone, who gave Hibbert his backing after his own efforts to remove the requirement for personal payment of rates had failed, the amendment was defeated on 9 May. Although unsuccessful, Hibbert’s intervention clearly influenced the Conservative ministry’s actions. With many MPs still dissatisfied, the issue was finally resolved in an extraordinary fashion later that month when Disraeli accepted an amendment from another Liberal backbencher, Grosvenor Hodgkinson, which took the revolutionary step of completely abolishing the practice of compounding.

Hibbert did succeed in making other alterations to the Reform Act. His most significant contribution was to make it illegal for candidates or anyone on their behalf to make payments for transporting voters to the polls in boroughs. Payments for railway tickets or the hiring of carriages and carts to convey voters were often used as a cover for bribery, and had become a major source of expenditure for candidates. Hibbert noted that at the 1865 election, £100,000 of the £800,000 expenditure declared by candidates was spent on the conveyance of voters. Bowing to advice from Gladstone, he agreed that his clause, carried by 166 votes to 101 on 4 July 1867, should apply only to boroughs, not to counties, where the distances which electors had to travel were far greater. He criticised efforts by Irish MPs to exclude certain Irish boroughs from a similar clause in the Irish Reform Act the following year, remarking wryly that he remained to be ‘persuaded that an Irishman could not walk so far as an Englishman.

Hibbert was re-elected in 1868 for Oldham, whose electorate had been increased five-fold by the 1867 Reform Act. He lost his seat in 1874, but returned to the Commons in 1877. Regarded as ‘one of the most loyal and useful members of the Liberal party’, he held a succession of junior offices in Gladstone’s ministries from 1871. He was ousted from his seat in 1886, but returned to Parliament in 1892, and was knighted the following year. He finally left the Commons following electoral defeat in 1895, having represented his native borough for a total 24 years. He remained active in county politics, serving as chairman of Lancashire County Council until shortly before his death in 1908.* 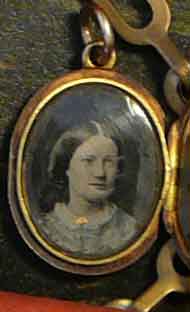 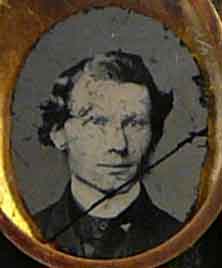 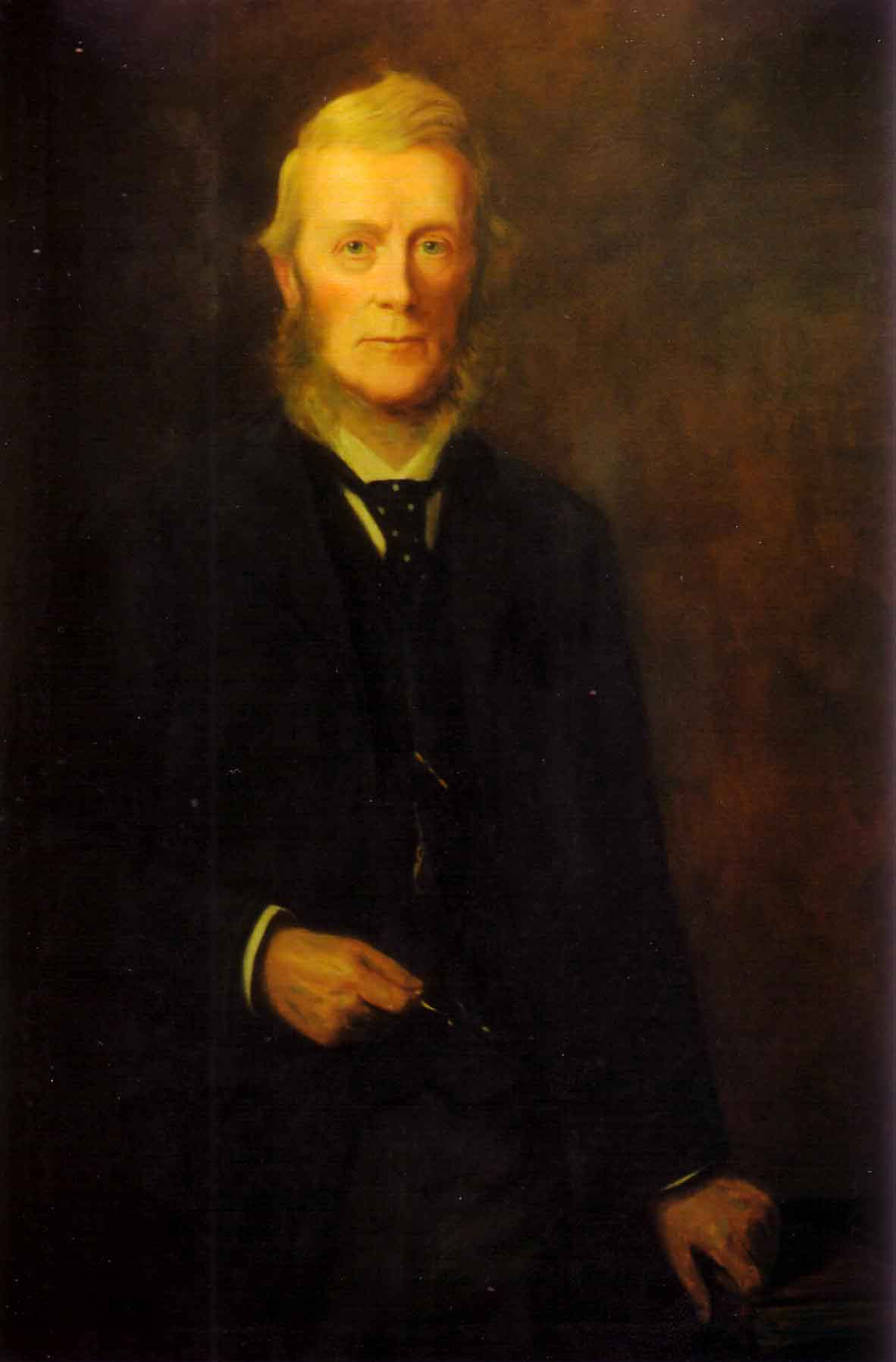 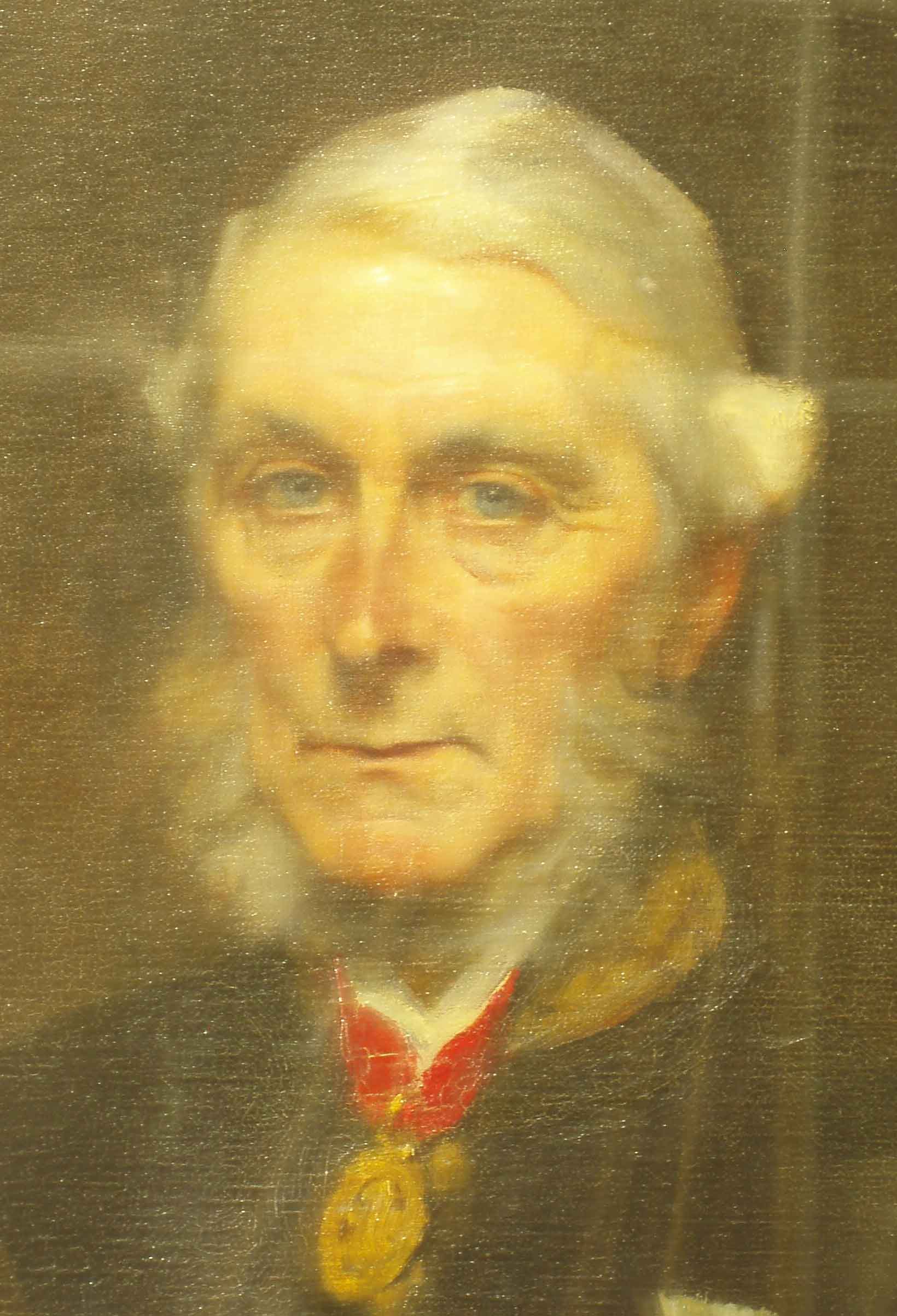 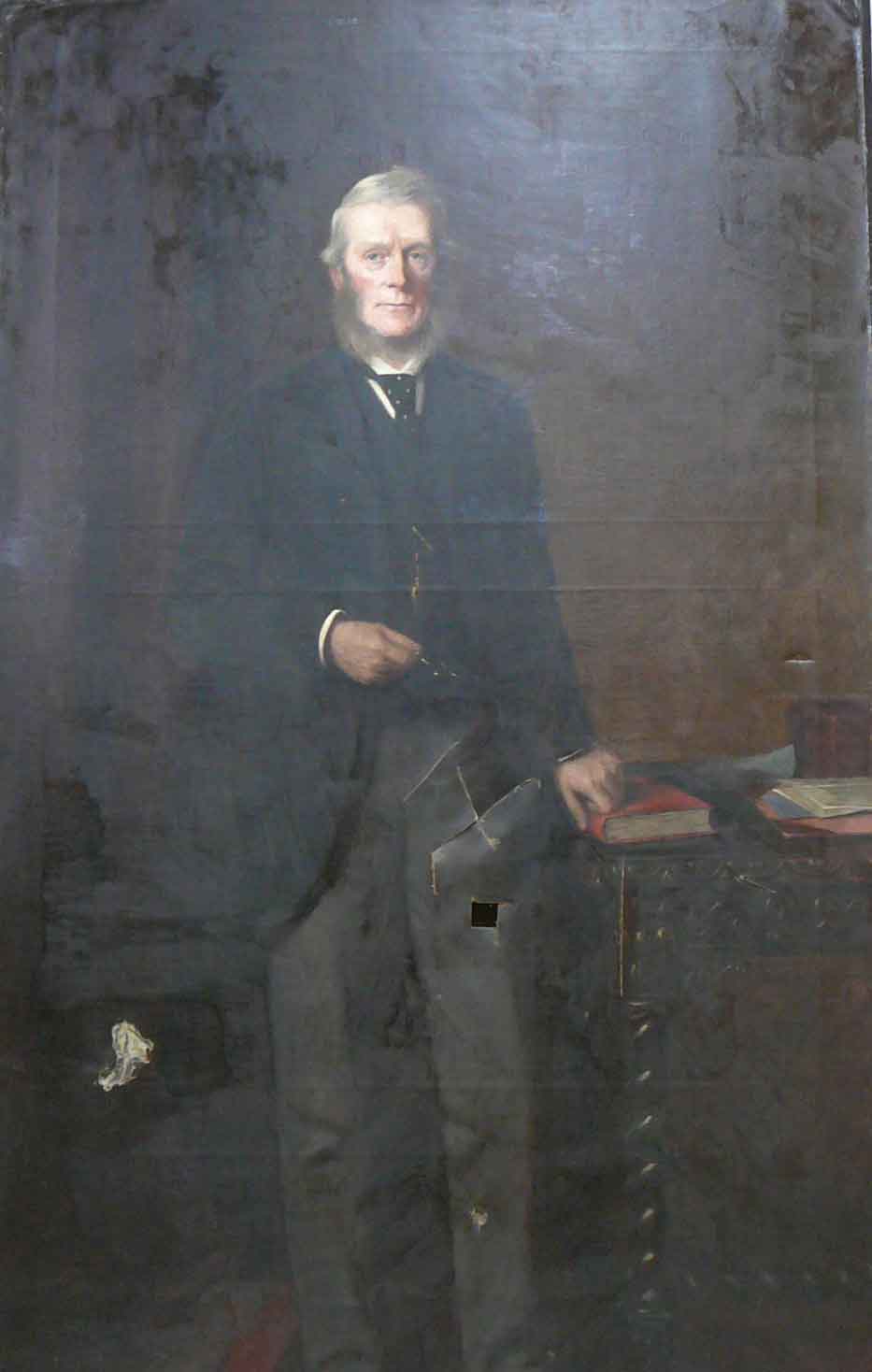 Portraits of Sir John Tomlinson Hibbert KCB b.1824 d.6 November 1908. The right-hand portrait hung on the stairs at the Lancashire County Council offices at Preston and was attacked. A swastika was cut into it. 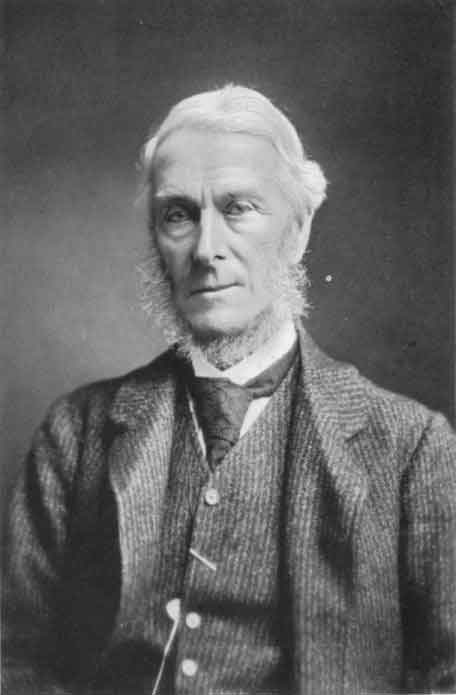 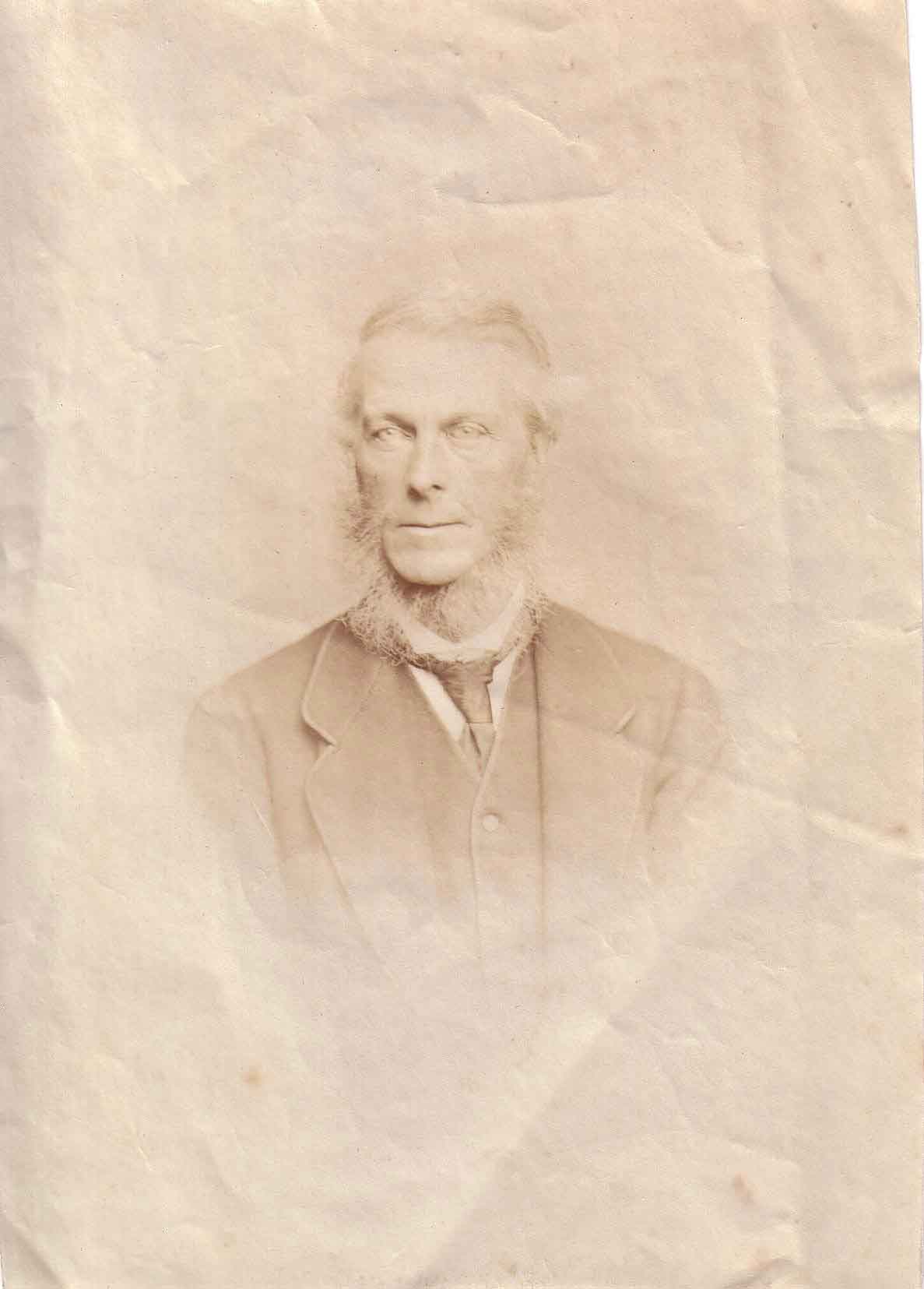 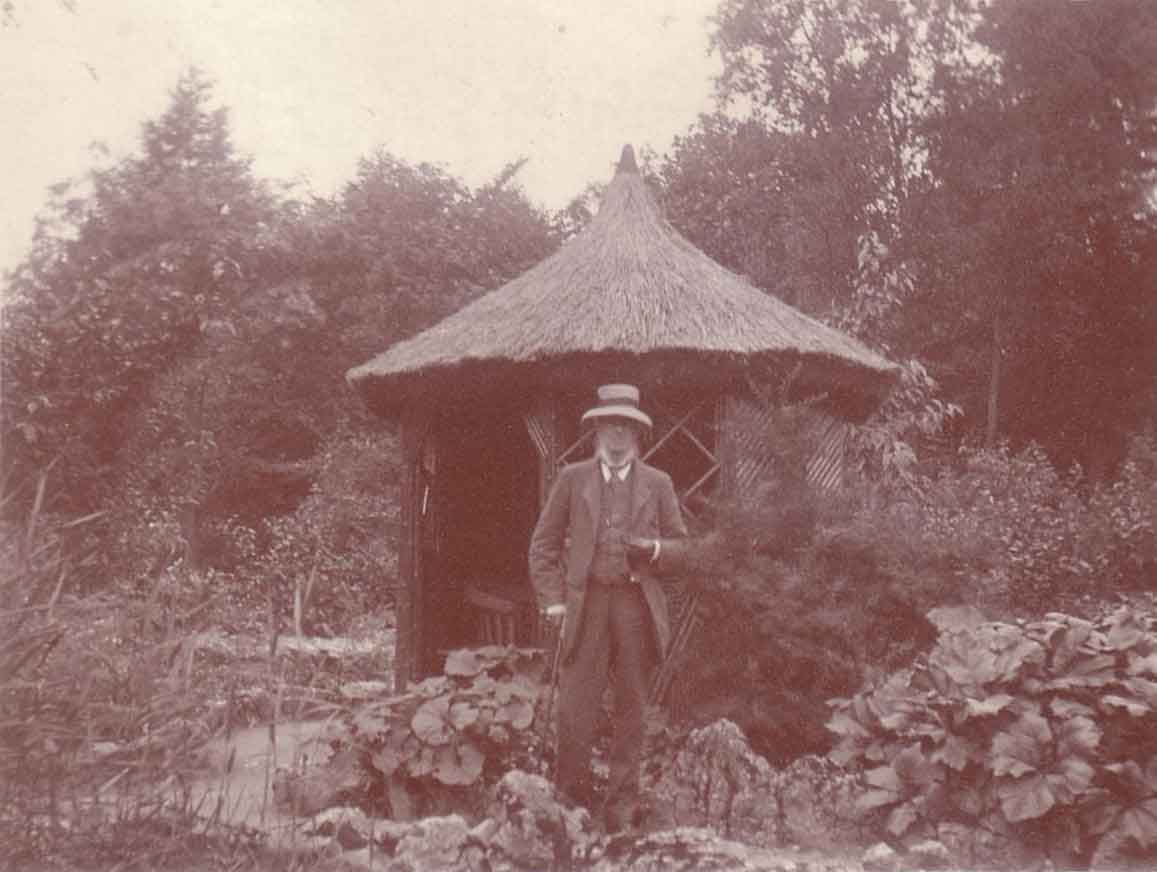 Sir John Tomlinson Hibbert in 'Japan'. This was a Japanese garden laid out on the hillside opposite the stables at Hampsfield. There were interesting plants there. Such gardens very popular in Victorian times. 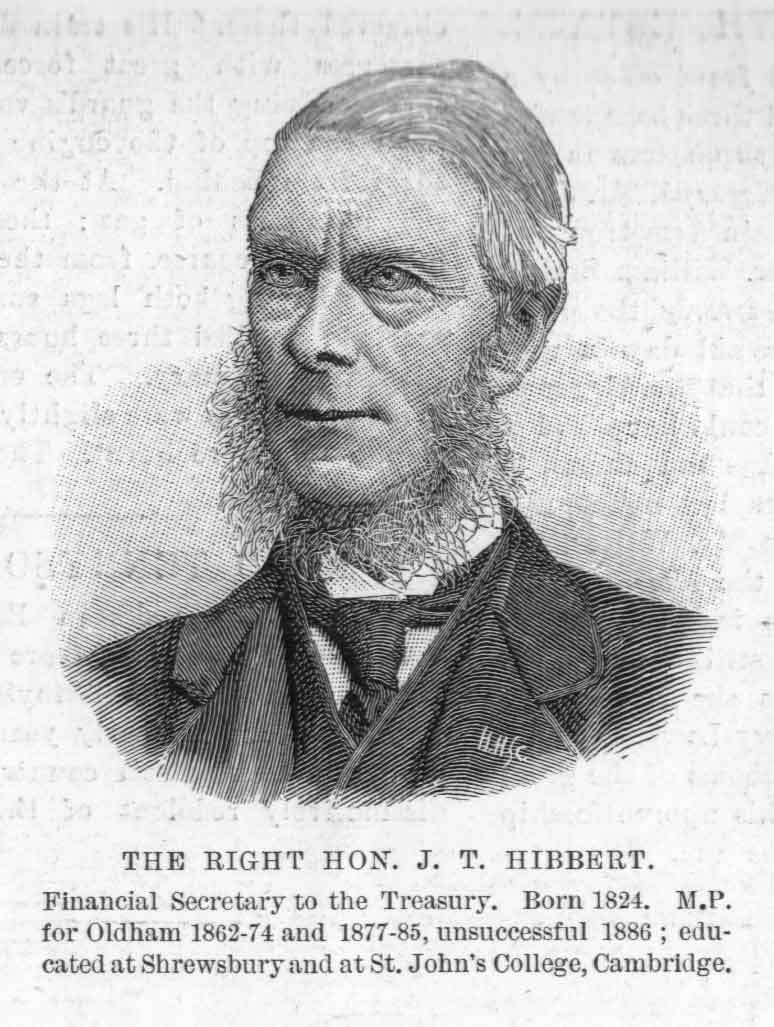 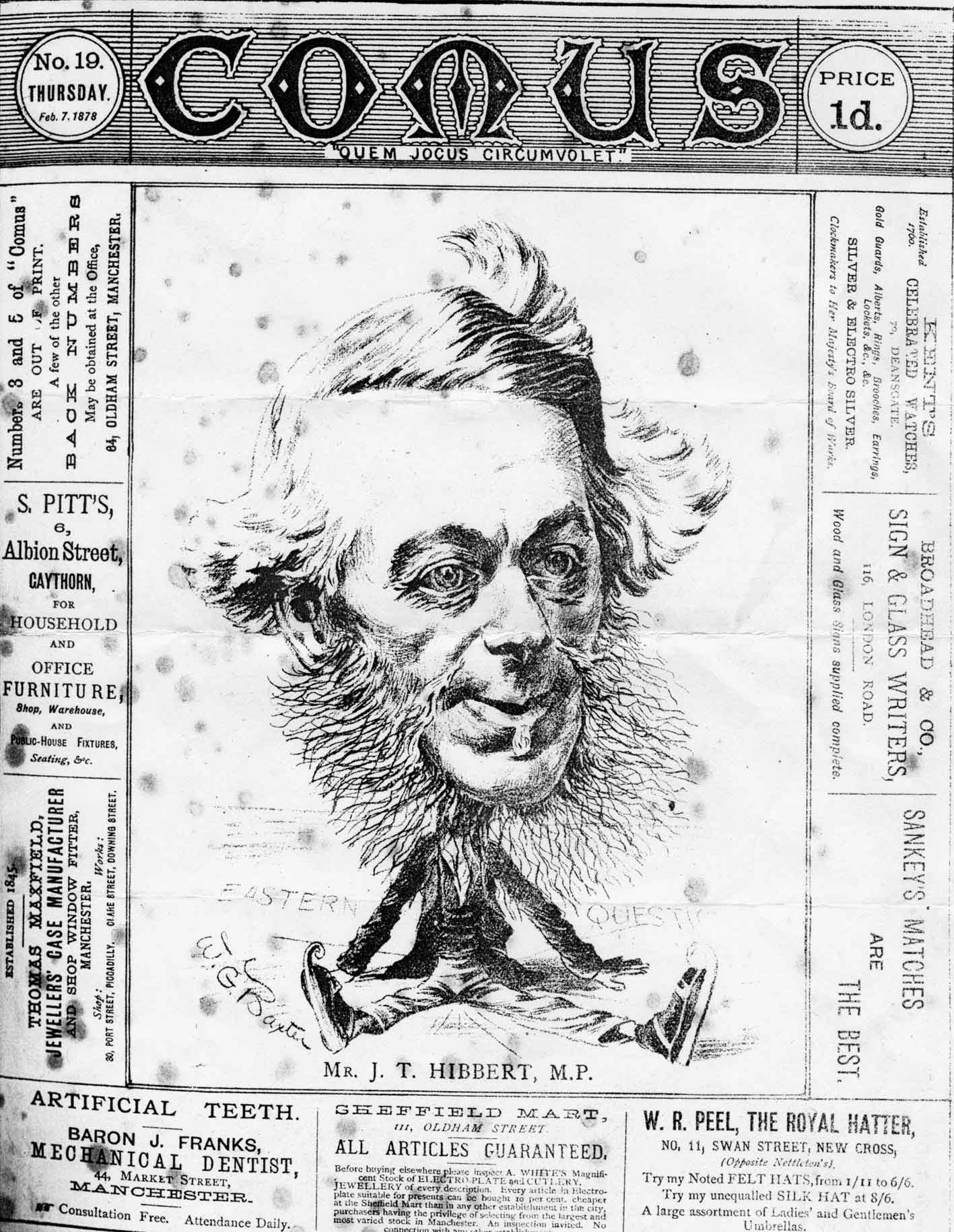 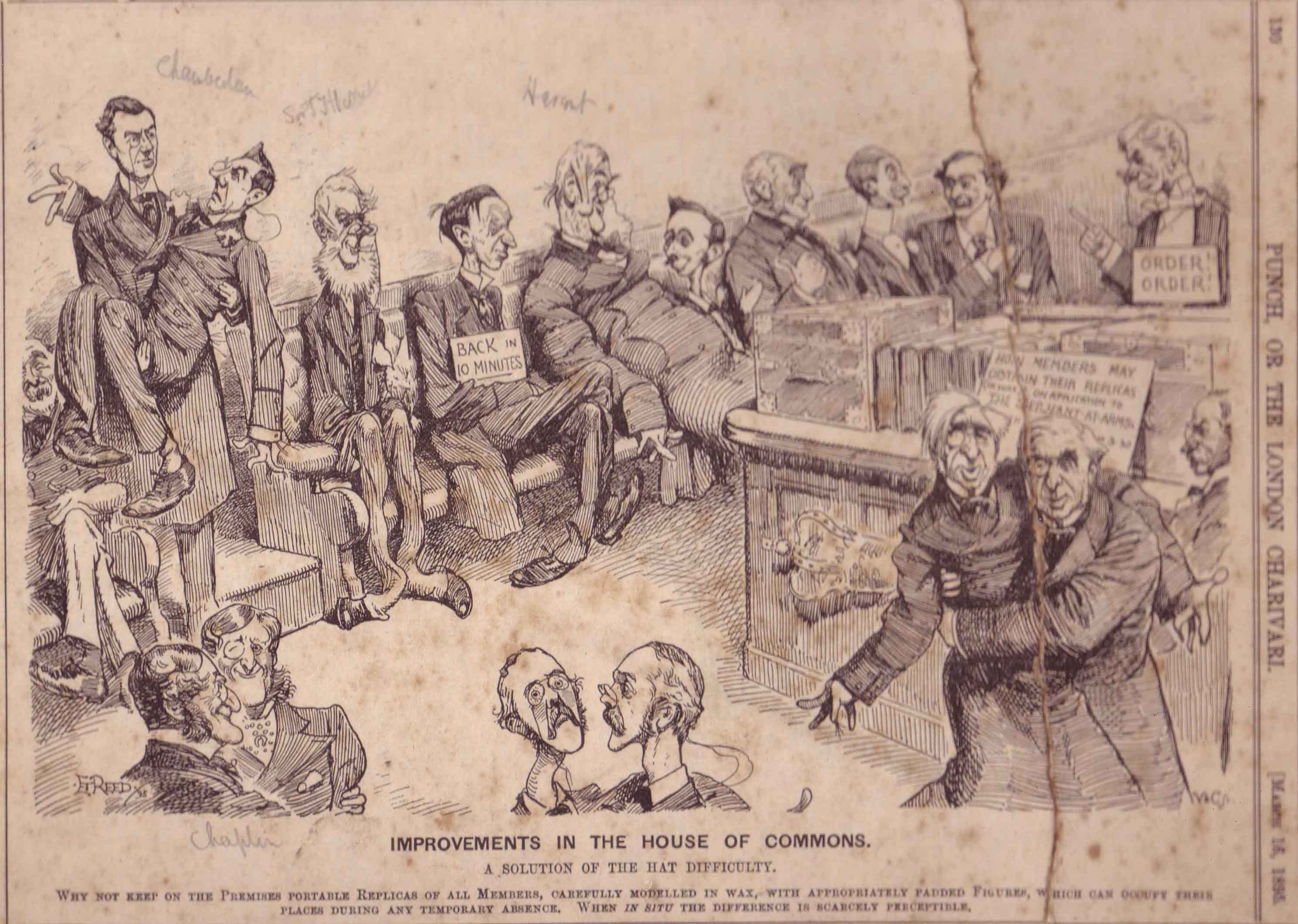 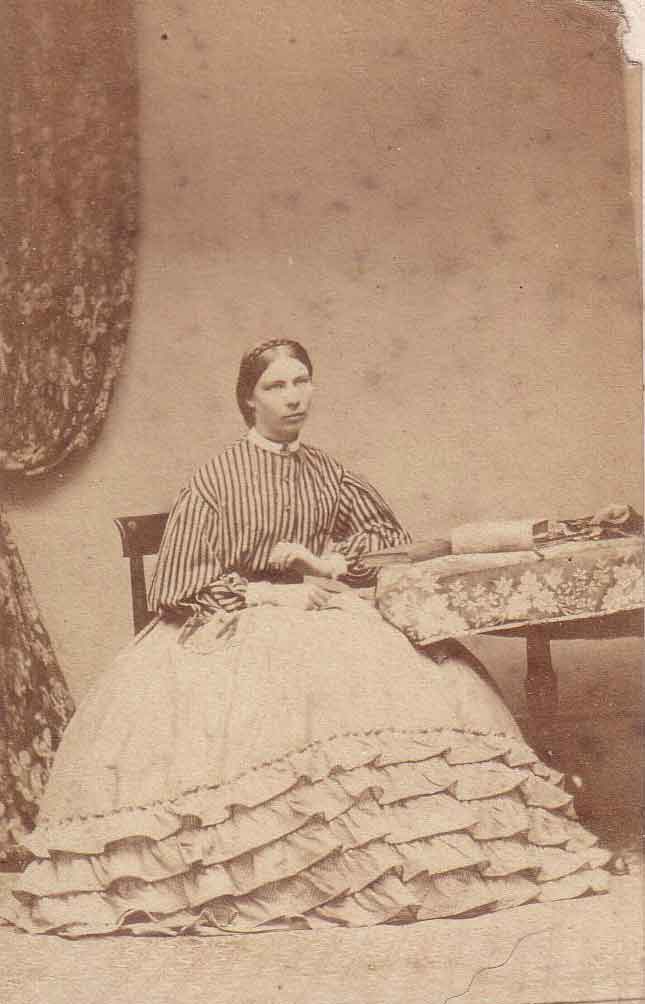 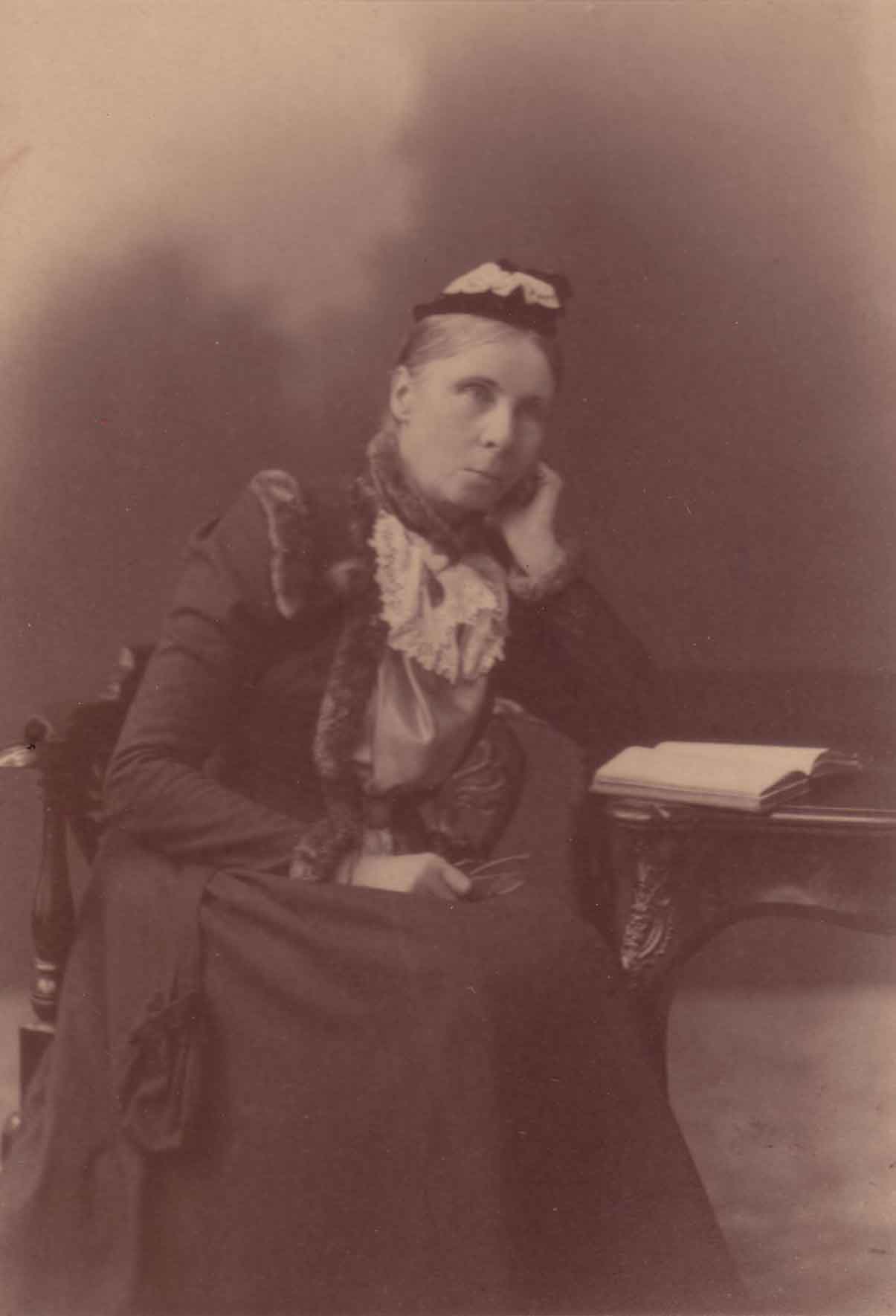 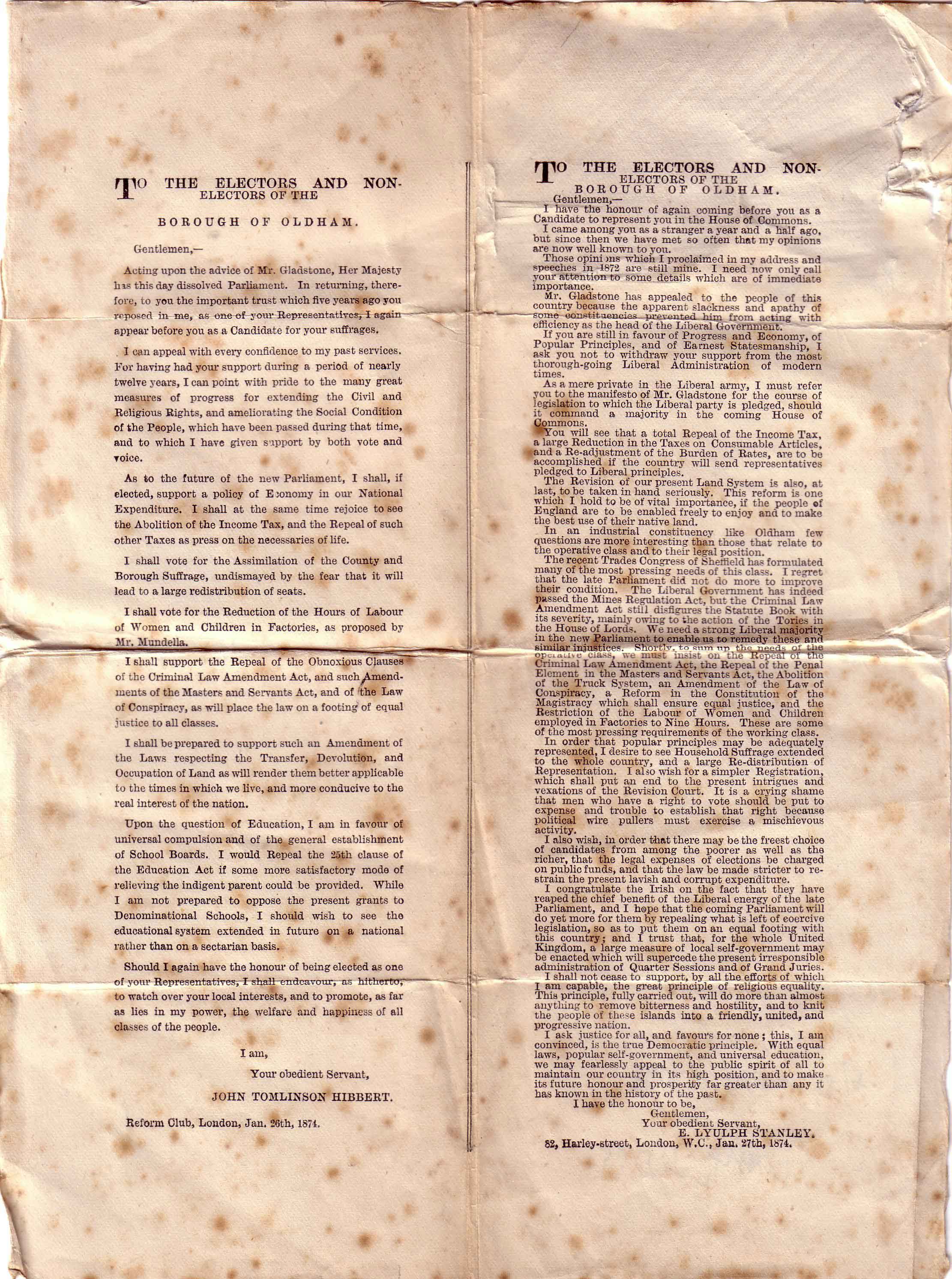 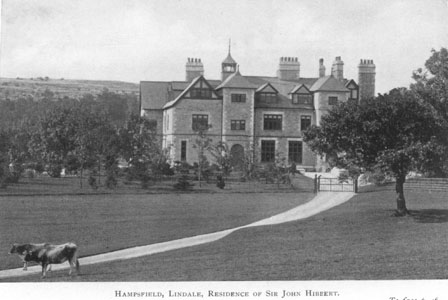 Hampsfield above Lindale, built by Sir John Hibbert, soon after its construction.